The 2016 York Ballers competed at Division 1 Nationals in Kentucky the week of July 23, 2014.  They went 2-1 in pool play taking a 5 point loss to the Indiana Thunder.  They posted wins over Ohio’s Hidden Gems and NBA Mike Millers Tenn. MM3.  They entered the champions bracket of AAU Nationals. Their 1st round victory came at the expense of Team One from Ohio 72-62. In the Sweet 16 round they faced Kentucky Elite.  Trey Shifflett scored an “and one” with 2 secs to go to seal the win 67-64. The Ballers received a 2point hit from eventual 3rd place finishers Tenn Tigers 61-59. We entered the last consol bracket to face the Minn Comets Elite.  Down 4 with 20 secs remaining Jason Rebuck nailed a 3 pointer to close the deficit to 2.  Jared Wagner stole the ball and pitched the ball ahead to Daren Gordon who sank a 3 as time expired to seal the deal from the Ballers.  In the fight for 5th place the Ballers fell to Tenn Team Tgand by the score of 56-53. The Ballers had an incredible run taking 6th place. 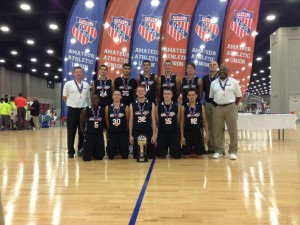